An App For The Lazy

This isn’t going to change the business world, but it certainly shows the ambition – or lack of – and the innovation of some developers. 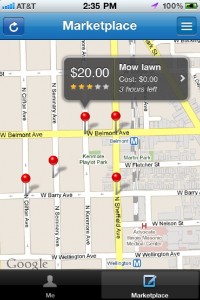 AirRun is a new iPhone app developed for folks who are either lazy or unemployed. And hold on, it’s not as weird as it sounds.

The idea is that if you want anything, you hop on your iPhone and place a request via AirRun. Maybe you want somebody to go buy your groceries or to come and mow your lawn. In addition to defining the task, you also note how much you are willing to pay for somebody to do the task for you – perhaps giving a job to the unemployed.

In AirRun parlance, you are a Seeker – a person who is seeking somebody to do something. Once your request is posted, anybody ‘in your area’ who wants to do the job for the price you’ve offered can let you know that they are game to do it. Those folks are called Runners: they make money by running errands or doing similar chores.

It’s all very localized. A Seeker’s jobs are only seen by local Runners, which makes sense. There’s no reason for a Runner in Tokyo to see a Seattle Seeker’s request that somebody go to the store to buy them a bottle of Gatorade.

To enable localized commerce between individuals, the service uses the advanced geolocation features of the iPhone. Rather than needing to call someone you know to do something for you, now you just put an AirRun request out and it magically happens as soon as you select a Runner. Runners are rated by Seekers so over time, the best and most reliable Runners will be well known to Seekers.

We’re told that some recent AirRun requests that have come in recently included: Get in line for me at the DMV; Personal Assistant for the day; Beginners Ukulele Lesson; Flowers for my wife; Bluegrass fiddle player; Help me get rid of snakes; Come to Our Office and Sing Happy Birthday to Kim.

With the service just transitioning from an early beta program to being up and running, the trick for the free iPhone AirRun app now is to get a critical mass of local Seekers and Runners.

This entry was posted on Monday, June 27th, 2011 at 07:32 @355 and is filed under DailyDOOH Update. You can follow any responses to this entry through the RSS 2.0 feed. You can leave a response, or trackback from your own site.