Every year at about this time one of our most searched for (and read) posts is (still) about the Wimbledon scoreboard. Something we first wrote about back in May 2008 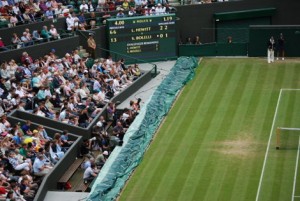 Back then we weren’t necessarily enamoured that the organisers of Wimbledon replaced some of the traditional scoreboards with giant video screens but as the years have gone by I guess we all got used to them.

Just to remind folks then. The dot matrix scoreboards on Centre Court and No.1 Court at the All England Lawn Tennis Championships at Wimbledon were replaced in June 2008 with Barco OLite 612 LED displays after an earlier trial in 2007.

The original press release stated that the Barco OLite 612 LED display is a multi-purpose display suitable for both indoor and outdoor use. With a 12mm pixel pitch, 6,000NIT light output and 15 bit processing, the OLite 612 delivers an extremely high quality image. The use of SMD technology enables wide viewing angles and superb uniformity at very short viewing distances. Thanks to it outdoor IP65 rating the OLite panels can be used in all weather conditions. With its modular design, screens can also be customized to everyone’s unique requirement.

This entry was posted on Sunday, June 26th, 2011 at 22:42 @987 and is filed under DailyDOOH Update. You can follow any responses to this entry through the RSS 2.0 feed. You can leave a response, or trackback from your own site.

One Response to “Wimbledon Scoreboard Explained”