Spectacolor Says Be ‘Greater Than AIDS’ 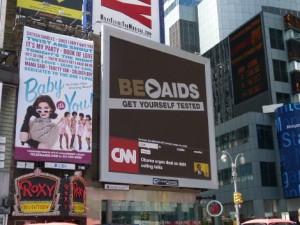 The U.S. Centers for Disease Control and Prevention estimates that more than one million Americans are living with human immunodeficiency virus (HIV) and, of that number, one in five (21%) is unaware of his/her infection.

Greater Than AIDS is a national movement that responds to the continuing HIV/AIDS crisis in the U.S., with a particular focus on the severe and disproportionate impact of HIV on Black Americans and gay / bisexual men. Through a national media campaign and targeted community outreach, Greater Than AIDS aims to increase knowledge and understanding about HIV/AIDS and confront the stigma surrounding the disease.

Clear Channel Spectacolor donated time on its billboard to bring mainstream attention to the AIDS epidemic.

The SpectacolorHD display is a powerful out-of-home platform that captures the attention of more than 500,000 people daily in Times Square. The Company hopes to leverage that platform raise awareness about the impact of HIV/AIDS, fight the stigma associated with HIV and other Sexually Transmitted Diseases, and encourage people to protect themselves and get tested immediately.

This entry was posted on Friday, July 1st, 2011 at 10:05 @462 and is filed under DailyDOOH Update. You can follow any responses to this entry through the RSS 2.0 feed. You can leave a response, or trackback from your own site.