The guys at City Gateway Media have always been good at selling media so we don’t quite get why they would hand over media sales to RAM Vision for their (City Gateway Media’s) iconic LED screen in Manchester. 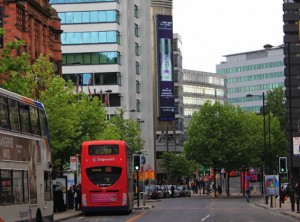 Regular readers will know all about the massive vertical, letterbox shaped 19m high by 3.6m wide screen which overlooks the central Piccadilly area in Manchester (not to be confused with Piccadilly, London). The screen has an estimated audience of 207,231.

Whilst Ram Vision will make the most of this announcement, RAM vision’s Paul Masterson explaining “This win has extended Ram Vision’s geographical reach, taking us firmly into Manchester City Centre. It also furthers the company’s destination portfolio as our first city centre outdoor LED screen.” we think it is a deal that will surely end in tears and acrimony (we actually suspect that there is something else afoot but more on that later).

David Lamey, Managing Director of City Gateway Media was quoted as saying “We selected Ram Vision as our partner on this venture as they have a great track record and reputation for working across regional campaigns and successfully bringing in revenue. Their proactive approach has led them being an ever expanding company with a great portfolio of national and regional clients and we predict a good level of growth with them in the future.”.

The press release stated that the company has already taken its first booking for the Piccadilly screen. Weird.

This entry was posted on Wednesday, June 29th, 2011 at 10:38 @485 and is filed under DailyDOOH Update. You can follow any responses to this entry through the RSS 2.0 feed. You can leave a response, or trackback from your own site.

2 Responses to “RAM Vision In Deal With City Gateway”