We understand that the German OOH powerhouse Ströer Out-of-Home Media AG is all set to make an acquisition. 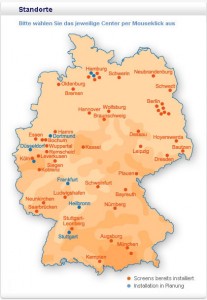 ECE flatmedia has a large network

There have been some wild rumours circulating on who the intended victim target actually is but we understand from good authority that it is more than likely ECE flatmedia GmbH. The two companies are at this moment locked in talks.

People’s guesses (all wrong) have stretched from the likes of Neo Media Group‘s German operations to the sub division of Deutsche Telekom, i.e Telekom Deutschland GmbH – Zentrum Mehrwertdienste, Out of Home Media (T-OOH).

If I were Ströer I would be investing in reach and Airports are a perfect addition to the train stations and public transport sectors they already have so T-OOH would make some sense BUT we have to say that the shopping mall assets offered up by ECE are a good fit as well.

Whilst Ströer Group and ECE may go to some lengths to deny the discussions to date we are confident that the acquisition will happen and be announced shortly. We have to say that it is a good deal for the industry as a whole.

This entry was posted on Sunday, July 17th, 2011 at 10:14 @468 and is filed under Scuttlebut. You can follow any responses to this entry through the RSS 2.0 feed. You can leave a response, or trackback from your own site.

2 Responses to “Ströer In Talks To Acquire ECE flatmedia”