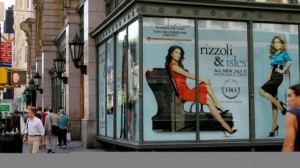 The month long campaign was launched June 27 – “way before the Posterscope/Proxama campaign you wrote about,” Dan Trigub, Blue Bite vice-president business development and CFO, pointed out. 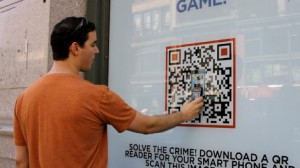 The interactive installation incorporated many technologies and capabilities including the first-ever NFC mobile interactivity-enabled storefront powered by Blue Bite and its mTAG solution.

The technology allowed pedestrians to place their phone near an identifying marker on the storefront that would immediately immerse the person’s mobile phone into the experience – thus providing incremental value and data to consumers. Content that was distributed included a unique & exclusive mobile game, opt-in for tune in reminder of the show, a unique and custom mobile wallpaper and a video trailer of the show. 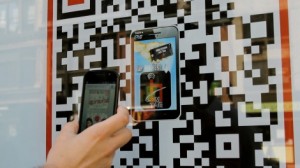 In addition to NFC technology the display used Bluetooth, WiFi and QR Codes to ensure that all consumers, and not just those with smartphones, could interact with the brand.

Upon the completion of the campaign the brand was able to engage with almost 4,000 unique mobile handsets, truly making the one-way impression-based medium of the storefront interactive and a two-way engagement with consumers at moments of maximum influence.

The 4,000 unique engagements included consumers who played with the mobile game, opted-in for the tune-in reminder of the show, saw a unique and custom mobile wallpaper and who viewed a video trailer of the show.

This entry was posted on Monday, August 1st, 2011 at 08:11 @382 and is filed under DailyDOOH Update. You can follow any responses to this entry through the RSS 2.0 feed. You can leave a response, or trackback from your own site.