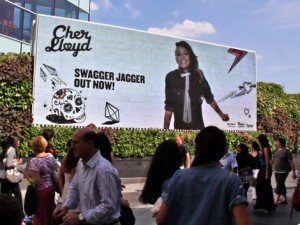 The Westfield London Eat Street take-over was the climax of a seven day countdown to the launch of ‘Swagger Jagger’ which was released in shops on August 1.

At 3pm, Ocean Outdoor played out the full music video, along with a pre-recorded message from Cher inviting fans to visit HMV in the Westfield Centre mall for a signing session.

Fans were able to purchase the CD from the HMV and receive a limited edition wristband to get access to the signing. Cher was in the shopping mall from 4pm to meet fans and sign copies of her new single.

‘Swagger Jagger’ is the lead single from Cher’s debut album, which is released in November 2011 through Simon Cowell’s record label, Syco Music.

This entry was posted on Thursday, August 4th, 2011 at 10:07 @463 and is filed under DailyDOOH Update. You can follow any responses to this entry through the RSS 2.0 feed. You can leave a response, or trackback from your own site.