8 Out Of 10 Owners Who Expressed A Preference…

For some reason @dhuelsermann. Founder and President of OVAB Europe and Manager NEC DOOH Solutions asked a few weeks ago the following via twitter “There are quite a lot of good blogs,covering the DOOH industry. So,from the following list, in alphabetical order,who is the most influential?” 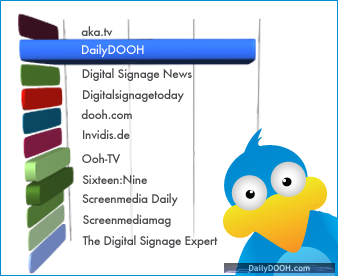 Now whilst only 246 people actually cast a vote we were nonetheless excited to have received a whopping 86% of the poll (211 votes).

In second place was sixteen:nine (5% of the vote with 13 votes) which was interestingly an accurate reflection of our own reading habits – Dave Haynes’ insight is a regular daily read for us.

In third place was Ooh-TV (4% of the vote with 10 votes) – multi-lingual and multi-talented Denis Gaumondie does a great job in French (possibly the only French language blog) and English.

We personally don’t bother with any of the other sites listed in the survey† apart from the Invidis German language site which we read regularly. We were actually surprised that they did not pick up more votes than they did.

This entry was posted on Sunday, August 14th, 2011 at 21:50 @952 and is filed under DailyDOOH Update. You can follow any responses to this entry through the RSS 2.0 feed. You can leave a response, or trackback from your own site.