We’re beginning to wonder what exactly is going on with McDonald’s digital signage in Canada. 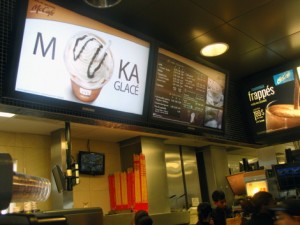 We learned this week that Eye-In Media, Montreal, is the company that has been behind the new menu boards and other digital signage in about 500 McDonald’s Restaurants centred around their McCafes across Canada.

“We originally started putting the new menu boards, digital screens and video walls in various McDonald’s McCafe outlets in Quebec, and these were successful, so we started being asked to handle the project rights across Canada,” says Nathalie Azoulay, Eye-In president. “We’ve deployed in close to 500.”

However, we had heard that EK3 may have won a recent RFP to take over that business, and Azouay told us that Eye-In has not continued deploying screens in the McCafes, despite having recently received 100 new orders for same. However, Eye-In is still deploying digital screens in McDonald’s dining rooms which, she says, were not part of the RFP. And she hasn’t been told officially who won the RFP.

“I have no idea what is going on,” Azoulay says. “We’ve been told that McDonald’s is trying out other companies, despite the fact that everybody was pleased with our product and that we were never late with an order. We were part of the RFP, but were never asked to provide information or asked any questions. We were simply told that the RFP was closed.”

We’ve noticed that McDonald’s is not listed as a client of EK3 on its website. We’ve also been told that blacked-out screens (not Eye-In’s and possibly EK3’s) are being seen in some McDonald’s. If EK3 is being sold as rumoured, perhaps everything there is at a standstill. Eye-In is as much in the dark as us on that score.

And we’ve been wondering who would buy EK3? We noticed on EK3’s website that it has partnered with both IBM and Dressor Wayne, (active in the retail fueling industry) in all its business sectors (QSR, financial, retail and fuel/convenience stores). With HP now into digital signage, we’re not surprised to be seeing the name of rival IBM showing up more in that sector. 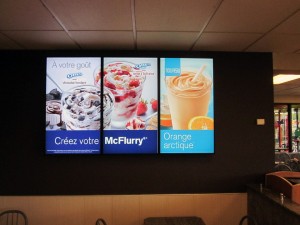 Eye-In does complete turn-key digital signage projects, The company developed its own software, and even handles creative. While it has other smaller retail clients, McDonald’s is the first big chain it has worked with. It also has signage in hospitals and CLSCs.

This entry was posted on Friday, August 26th, 2011 at 03:02 @168 and is filed under DailyDOOH Update. You can follow any responses to this entry through the RSS 2.0 feed. You can leave a response, or trackback from your own site.