There’s Been A Murder

Media Displays‘ Digivans were used for an appeal in Nottingham, UK for the murder of a young mum. Last Friday† Police took to the streets, using this latest crime fighting weapon to identify a suspect and to gain vital information relating to the murder of young mum, 28 year old Caroline Coyne. 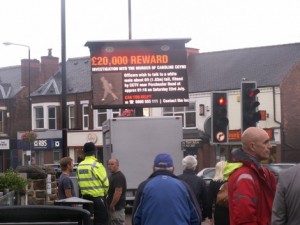 Nottinghamshire Police used the mobile LED screen digivan at last known locations, where Caroline had been seen, the digivan displayed specific requests for information regarding a vehicle, clothing and description of a person the Police are interested in talking with. In addition this provided Nottinghamshire Police with the opportunity to engage with the public.

DCI Tony Heydon said “Our investigation is continuing and this is yet another tactic we are looking at to raise the profile and ensure that everyone has seen the CCTV, a photo of Caroline and also a picture of the pink and white size three Nike trainer that are still missing. Using a mobile TV digivan enables us to target a wide audience who may have missed previous news bulletins about Caroline’s death. It will feature in static locations to draw people to it to see what is on the screen, and will also be driven between locations”.

Ian Taylor, Managing Director Media Displays was quoted as saying “Last week saw the first time a mobile digivan was used in support of such a significant and emotive situation. The sheer value of targeting specific people, specific areas and with specific messages, demonstrates once again the power we all have, with deployment of digital screen technology, out of home”.

The ad van was driven between parts of Mapperley Plains, Carlton and Netherfield, and parked up at specific locations to enable local residents, revellers and passersby to view footage and photos of Caroline.

†On Saturday a man was arrested and charged.

This entry was posted on Tuesday, August 30th, 2011 at 05:00 @250 and is filed under DailyDOOH Update. You can follow any responses to this entry through the RSS 2.0 feed. You can leave a response, or trackback from your own site.