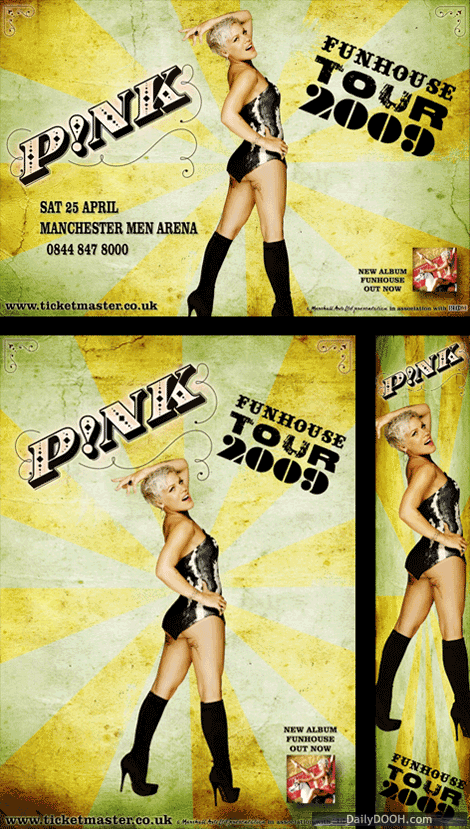 Amigo Digital have just delivered another creative campaign for multiple screens – this time for the pop star Pink to promote her 2009 Funhouse Tour.

Live Nation commissioned Amigo to create 5 x 20 second ads for 5 of the largest digital screens around the UK including City Gateway Media in Manchester, Forrest Media in Glasgow and Manchester, Media Stream in Birmingham and Ocean Outdoor’s screen – the largest commercial screen in Europe – in Liverpool.

The montage above shows screen shots of Glasgow and the 2 Manchester screens.

From a creative perspective, it was great to be able to bring to life the existing artwork and reflect some of the character of Pink and her latest album Funhouse. Our experience in designing creative for multiple screens and multiple formats helped turn around this project within 2 days for playout that started this week.

Pink was in the UK last week and featured at the MTV Networks Europe Music Awards held in Liverpool, the European City of Culture; we understand that if she has time, she may well go take a look at her massive digital ad being played out on Ocean’s 204 sqm screen – now that would be cool 😉

This entry was posted on Tuesday, November 11th, 2008 at 09:55 @455 and is filed under DailyDOOH Update. You can follow any responses to this entry through the RSS 2.0 feed. You can leave a response, or trackback from your own site.