One of the particularly interesting sessions at CIO Retail Summit in Scottsdale, Arizona, last week dealt with how the major retail chain Nordstrom moved into mobile in a major way. 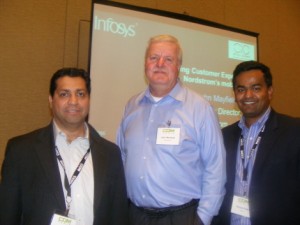 In partnership with Infosys, Nordstrom in a period of six months deployed..

Founded as a shoe store, Nordstrom is a 110-year-old retailer, doing $9.31 billion annually. The company is known for its best-in- class customer experience, which is built on the four pillars of price/value; convenience; service; and selection. It wanted to strengthen key service, product differentiation and customer experience.

“We made a big capital investment at the cash level a few years ago,” said John Mayfield, Nordstrom’s director of IT. “Recently, we decided on mobility to enhance the customer experience and to keep the salesperson connected with the customer.“

Now that the mobile efforts have been deployed, Nordstrom is considering a number of new efforts, including the digital wallet, DMV readers, and NFC.

This entry was posted on Monday, September 5th, 2011 at 07:00 @333 and is filed under DailyDOOH Update. You can follow any responses to this entry through the RSS 2.0 feed. You can leave a response, or trackback from your own site.

One Response to “Nordstrom’s Mobile Deployment”