It was interesting to hear the number of speakers who referred back to Adrian Cotterill’s various comments following his keynote speech Wednesday morning at the International Scala Conference being held in Noordwijkerhout, near Amsterdam in The Netherlands. 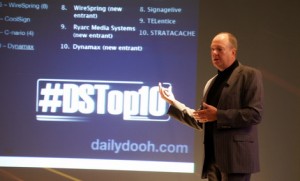 Cotterill, editor-in-chief of DailyDOOH, who we expected would concentrate his talk on the London Stock Exchange installation (which he did include), actually tackled many topics during his hour-long keynote, beginning by telling Scala, “You have a good brand and a long heritage, but not a great brand. Others are good at some things, but you have a product which is incredibly configurable and have strength and depth in so many areas. You don’t blow your own horn enough.”

In discussing the ‘theatre’ of the London Stock Exchange – which involves nine Scala players – Cotterill ‘deconstructed’ the building of the digital signage of the structure, going back to the beginning and noting that there was an early realization that ‘boring screens with some video on them’ was not the way to go. Christie MicroTiles gave the ability to use various shapes. “Don’t think that content is king; shape is king,”, he urged his audience.

While everyone was interested in providing the digital signage software for the stock exchange installation, it came down to two vendors; Scala and Omnivex were shortlisted on their technical ability, with Scala’s brand and heritage clinching the deal.

Taking it beyond the London story, Cotterill teased the assembled audience by asking them “Do you know how good you are?”. He then proceeded to list what he saw as their strengths but of course being the critic that he is, he could not resist listing a number of improvements that he thought they could make.

Recognizing that Scala can provide a solution for any size business, can integrate with almost anyone and that the product can work in any vertical sector, Cotterill urged, “Be more open-minded.” and added “Don’t be afraid of other competitive offerings out there”.

Whilst on the subject of being ‘open-minded’ he added that he’d like to see Scala build a bridge to the OpenSplash player and put the company’s weight behind the open source initiative.

This entry was posted on Thursday, September 15th, 2011 at 23:45 @031 and is filed under DailyDOOH Update. You can follow any responses to this entry through the RSS 2.0 feed. You can leave a response, or trackback from your own site.