Mac Based DS In Sports Arena Makes Headlines In Sweden 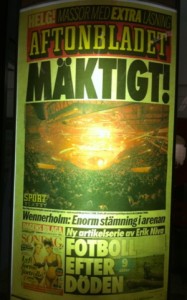 The new VIDA Arena in Växjö, Sweden, has an innovative Mac-based digital signage system powered by ~sedna presenter. The opening of the arena made it into the front page of Sweden’s largest newspaper, where the screens were the heroes, and were described as Mighty (Maktig!).

The arena, with a capacity of 6,000, is now equipped with a 4 x 13.5m2 display cube and a two 14m long LED banners and a 25m circular display directly above the playing field. Twenty-one 2m banners cover the entrances to the arena with around fifty-four LCD screens mounted throughout the building’s various amenities. The arena’s VIP lounges feature twenty-four iMacs and it’s all linked.

As with any sports arena, access to modern television broadcasting equipment has played a central role in designing the installation. To meet these demands, iCast, the Scandinavian distributor for ~sedna presenter and the company in charge of the whole installation, integrated ~sedna presenter into TriCaster for the on-site TV studio. This allows for extremely adaptable broadcasting capabilities from a simplified and stable setup.

Mats Hultemark , owner of iCast comments: “We think this project is very unique as we are using a digital signage system to present everything from live scoreboard, to live Video-signal (external TV + the teams own Tricaster-based TV), commercials, game effects (score, player-data, statistics etc). The TV-production is also streamed to selected ~sedna monitors strategically placed around the arena, sport bars, VIP-lounges where also scoreboard and game statistics are shown.”

The whole system is based on 80 ~sedna powered by Macs presenting media synchronized all over the arena.

“The system is controlled by five iPads in which we have developed the control interface,” explains Hultemark. “We also developed the first Mac OSX based professional hockey scoreboard application in order to be able to integrate the data into the DS system and to stream/broadcast the data to the national TV-broadcasting all the games played.”

Hultemark  added that by using ~sedna they where able to build a very dynamic solution. “For example a home team score will generate a party atmosphere in the whole arena!  Different media is synchronized to play on the cube, LED-monitors inside the arena, monitors in bars and restaurants and the VIP-lounges together with the right music. We are even controlling the exterior lightning in different colors from ~sedna in order to further strengthen the effects. No one inside or outside the arena should miss the fact that the home team has scored!” he says.

~sedna is a privately owned and managed technology development company based in Berlin, Germany.

This entry was posted on Monday, September 26th, 2011 at 10:00 @458 and is filed under DailyDOOH Update. You can follow any responses to this entry through the RSS 2.0 feed. You can leave a response, or trackback from your own site.