Note the times above in those two tweets cos’; it’s just before six o’ clock now as I write this and within 41 minutes (yes 41 minutes) Amscreen had reacted to the suggestion and had the campaign shown below up and running across ALL of their UK networks… 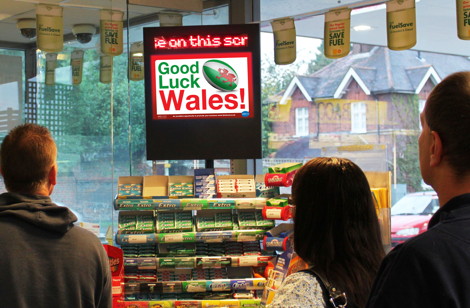 Simon Sugar, CEO of Amscreen, told us “Saturday is a big day for Wales and it seems right that we wish them ‘Good Luck’ ahead of the match. The ability to update our network in real-time enables us to do impromptu things such as this and we hope it will further encourage the nation to get behind the team. If they make it to the final, we’ll no doubt do the same again!”

The Welsh team will take on France in Saturday’s World Rugby Cup semi-final in Auckland at 9am (GMT) and probably marks the most important match in the country’s Rugby history.

Amscreen and indeed the many nations (Rugby playing or not) in DailyDOOH (England, Argentina, Canada and err Spain) send their well-wishes to the millions in Wales ahead of the semi-final against France.

Our Paris correspondent may have other ideas but we will ignore him for the time being!!

The whole process, from idea, creative, delivery and even the PR took less than 60 minutes!

This entry was posted on Friday, October 14th, 2011 at 17:58 @790 and is filed under DailyDOOH Update. You can follow any responses to this entry through the RSS 2.0 feed. You can leave a response, or trackback from your own site.