Exhibitors at the first InfoComm Middle East & Africa held at the Dubai International Convention and Exhibition Centre gave the event a thumbs-up at the close of the Show this week with exhibitors pointing to substantial traffic flow, the quality of visitors and the excellent organization of the event that contributed to an overall more-than-satisfying experience for them. 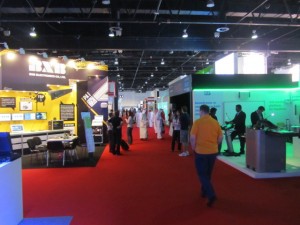 More than 90% of this year’s exhibitors have already re-booked their space for the 2012 event, scheduled for October 14-16 – three days rather than this year’s five.

With 10,604 visitor registrations in the first four days, the organizers were expecting the number to top 12,000 by the end of the five-day event. Management says that this is by far one of the best showing for an InfoCommAsia regional show in recent years. The organisers acknowledged that the synergy with GITEX Technology Week proved beneficial.

IFMEA will return with a bigger show next year and will again be co-located with GITEX Technology Week. Companies like Extron, Crestron, Mitsubishi, Sharp, Jupiter, Samsung, Venuetech, Wolfvision, Hitachi, NEC, AMX, Arrive System and many others have re-booked their booth space; while Sony and Vtron who missed this year’s show have also reserved a booth for the 2012 event.

Alistair Duthie, divisional manager of Mitsubishi Electric Europe, Visual Information Systems Division, says, “This is the only event that covers the entire Middle East region for the pro AV industry. There’s been good traffic flow and quality visitors who are clear about the products and services they are looking for. We will definitely be back next year.”

Brady O Bruce, vice-president of marketing and strategic alliances, Jupiter Systems, says, “We jumped at the chance to participate in an InfoComm event covering the Middle East and Africa as a way to form new partnerships and drive more business in the region. We have not been disappointed. The quality of attendees has been fantastic. We have met with top-notch integrators, as well as key figures in government and the private sector, working on specific and substantial projects. In fact, we’ve issued some large sales quotes at the show. This has been another terrific InfoComm event – well planned, well organized, and well marketed. We will be back.”

Demetrio Faroldi, Analog Way‘s area sales manager, considers IndoComm MEA the most professional and dedicated industry event in the Middle East and says that, despite this being the first showing, it is already the most important event for Analog Way.

“We are delighted with the feedback and responses from our exhibitors,” says Richard Tan, general manager of InfoCommAsia – the Asia-Pacific regional subsidiary of InfoComm International. “The statistics are very encouraging indeed, especially in the light of current global economic uncertainties. We are heartened that the pro AV industry has shown resilience and kept its focus on growing the industry and markets.”

More than 70 pro AV manufacturers and suppliers from 16 countries participated in InfoComm MEA 2011.

This entry was posted on Saturday, October 15th, 2011 at 07:00 @333 and is filed under DailyDOOH Update. You can follow any responses to this entry through the RSS 2.0 feed. You can leave a response, or trackback from your own site.