Will NanoLumens Ever Replace XTP?

Interesting comment from several of our readers, including a certain Senor Luis Villafane from Maler DSO who tells us that he “just visited the Nanolumens website and saw that the CBS Projection Systems on the London Underground on Baker Street were changed to their technology.” 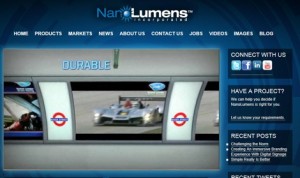 The flash page of www.nanolumens.com clearly shows Baker Street tube station using the screens but alas it’s pure vendor bluster – a vendor getting a little over excited and a web designer using a little too much literary license.

CBS Outdoor’s XTP has long been ‘tired’ and replacing it with something like NanoLumens would make sense (though we doubt it would be financially viable at present).

This entry was posted on Thursday, October 20th, 2011 at 13:03 @585 and is filed under Scuttlebut. You can follow any responses to this entry through the RSS 2.0 feed. You can leave a response, or trackback from your own site.