Raise Your Game (Yes Lyonsdown You Should)

So not surprisingly we see, once again, a money making publishing house with no knowledge of any industry (AV, Control Rooms, Digital Signage, DOOH, teleconferencing, telepresence and more in this case), and no skin in the game (so to speak) either, cobble together meaningless words and pictures, get monies from foolish marketing departments (in return for blatant advertorial) and distribute (in this instance) a 16 page AV supplement in one of the UK’s leading newspapers. Ummm. 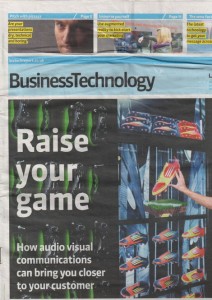 How bad is it? Well it’s confused as we thought it would be when we first saw the media pack a few months ago. The main title is ‘BusinessTechnology’ and below that ‘Raise your game‘ and ‘How audio visual communications can bring you closer to your customer’.

Having read through the supplement half a dozen times I can assure you that it will not help any reader understand anything like that at all.

That disparate set of advertisers, who if you were to draw a Venn diagram of interests would have little or no intersection, pretty much demonstrates how vague and unfocused this particular supplement is.

On page 2 Sue Tabbitt – “a technology journalist covering a broad range of business and IT subjects for the Daily Telegraph, The Sunday Telegraph and the Guardian blah blah blah” so it says (on her twitter profile she describes herself as a “Fantastic technology/business writer”) writes an incredibly poorly thought out introduction ‘A sight to behold‘ which starts off discussing employees taking their smartphones and iPads to the office and ends somehow with the (supposed) fact that big brands are allocating large budgets to digital media agencies? Yes go figure that as an introduction!

It would be good if we could actually end this review by expressing our surprise at the (poor) level of journalism and research that seems to have driven what can only be described as a waste of print. We can’t though as we are not surprised.

Truly awful does not begin to describe it and those vendors who refused to participate should pat themselves on the back for a near-miss (and money well saved); to those who parted with cash (and it doesn’t matter how much / how little you think you got your ad / advertorial for) you have quite simply wasted your money.

†transporter / teleportation in Star Trek: The Original Series has nothing to do with Holograms.

Perhaps the author was thinking of the Emergency Medical Hologram in Star Trek: Voyager.

Surely demonstrating such a sad lack of knowledge of the Star Trek Franchise, its six television series: The Original Series, The Animated Series, The Next Generation, Deep Space Nine, Voyager, and Enterprise and the eleven feature films

This entry was posted on Thursday, November 24th, 2011 at 10:55 @497 and is filed under DailyDOOH Update. You can follow any responses to this entry through the RSS 2.0 feed. You can leave a response, or trackback from your own site.