It’s An Early Start But Someone Has To Do It 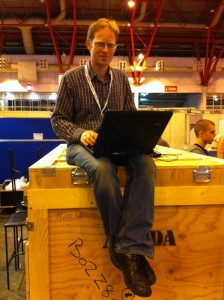 It’s a very, very early start for the intrepid DailyDOOH team today (Tuesday 29th November) as we head off for a long trip around London.

We will be armed with Digital cameras, tripod, Garmin SatNav and GPS, Kensington Ultra Portable Power Inverter 150 – DC to AC power inverters, two MacBooks, one iPad, clipboard, paper and pencils, hi-viz vests and those funny little white hats (though we have yellow) that the ‘construction worker’ in Village People wears.

Did you know that there are at least 54 separate roadside digital billboard installations in London? With some of them having many ‘display faces’ (especially those owned by Ocean Outdoor) and several that have more than one screen at a locale, there are over 70 separate LEDs.

We are kicking off a project where we will be visiting many of London’s digital billboards – on our travels we may even tell you what we see!

This entry was posted on Tuesday, November 29th, 2011 at 04:20 @222 and is filed under Scuttlebut. You can follow any responses to this entry through the RSS 2.0 feed. You can leave a response, or trackback from your own site.