Our quick look at the month ahead is a few days later than usual this time around. Mind you there’s unsurprisingly not much happening in the lead up to the holiday season. 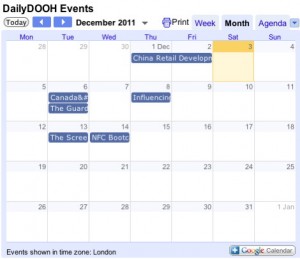 Again in London but the week after The Screen are holding their 2011 Digital Perspective on Tuesday, 13 Dec 2011.

The last event that we know about during December is NFC Bootcamp Santa Clara on Wednesday, 14 Dec 2011 in (yep you guessed it) Santa Clara, California.

This entry was posted on Monday, December 5th, 2011 at 06:59 @333 and is filed under DailyDOOH Update. You can follow any responses to this entry through the RSS 2.0 feed. You can leave a response, or trackback from your own site.