After hearing riveting presentations by Téléciné Multimedia’s president James Fine and technical director Stéphane Bastien at the Scala conferences in Philadelphia and Amsterdam this year, it was a company we wanted to know better and we finally had the opportunity to spend several hours yesterday with Fine and his team in eastern Montreal. 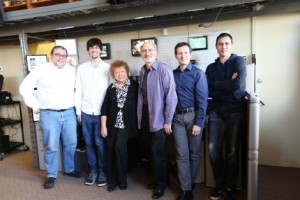 Téléciné has been a Scala partner from way back, and Fine and Bastien gave such jampacked information – interlaced with humour – at the aforementioned conferences that they were besieged with questions in much too short time frames to answer them all.

Trying to describe Téléciné is almost like trying to put a square peg in a round hole.

“I guess you could call us a digital communications company with the goal of always trying to find killer ways to communicate,” says Fine. “We use Scala because it can do almost everything, and when it can’t do it, we program to find ways that it can. Even Scala has often been surprised to find we use it for unexpected and in previously unknown ways.

“We’re constantly evolving. Sometimes we even do stuff for other Scala partners.” 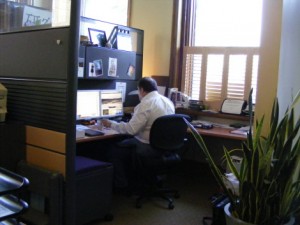 Téléciné will often develop the templates so its customers can enter their own creative, but will handle management of the screens and their maintenance behind the scene. It will host various screen networks and companies’ banks of visual assets from its own offices. And, of course, it will develop graphics content, manage the installation, find partners as required, and do whatever else is needed by its clients.

While well known in Canada for its work for such clients as Agropur and the University of New Brunswick (the latter with Christie MicroTiles), it is becoming increasingly better known in the U.S. and worldwide. It took a Digi Award in 2008 for work for Bloomberg. It has done work for Accuweather. It developed Footage2Go where it digitized all the film and other visual assets for the Iron Ore Company of Canada, all with meta data, from which IOC can now call up pieces for public relations, media, publications and other needs as required.

“It helps the company control what people are learning about it,” says Fine. 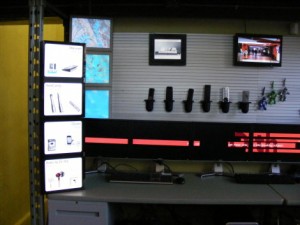 A Boutique iStore unit at left

One thing we planned to go and see with Fine (unfortunately, time ran out) was the one kilometer long interactive video installation Télécine did this year for Socété Radio-Canada’s 75th anniversary. It is comprised of 47 screens and 25 players. The largest display is a horizontal 1 x 4 array with LG 40″ narrow screens. There is a 65″ plasma touch screen as well.

On a smaller scale, we were intrigued by a small and inexpensive plug-and-play four-screen unit backed by a small computer and Wi-Fi unit, done for Boutique iStore. The young company is putting the units into all its stores, including those it is opening in airports. Also intriguing was another extensive installation using inexpensive photoframes, done for a U.S. bank.

“These were both very affordable solutions,” says Fine. 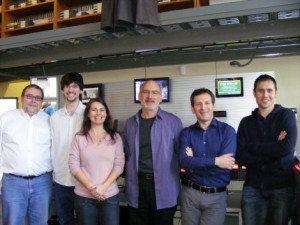 The 'essential' project coordinator Josée Paradis with the team

Téléciné is housed in an old bank building redesigned by Fine’s partner Chantal Bilodeau, an interior designer (who also served us a delectable multi-course luncheon in the company’s board room – right down to cookies baked by Fine’s mother.) The company works mainly on the main and second floors, which even include a small sound studio and an editing studio, two very essential coffee makers, along with two ‘guest suites’ where the company can put up clients from out-of-town. Fine’s living quarters are on the top floor – “great for getting to work on snowy days in winter,” he says.

“We have a lot of clients that we’ve never met face-to-face,” says Bastien. “We can do everything from here.”

The company has only 12 permanent employees, usually working on half-a-dozen projects at once, and bolstered by freelancers as required.

This entry was posted on Friday, December 9th, 2011 at 10:01 @459 and is filed under DailyDOOH Update. You can follow any responses to this entry through the RSS 2.0 feed. You can leave a response, or trackback from your own site.