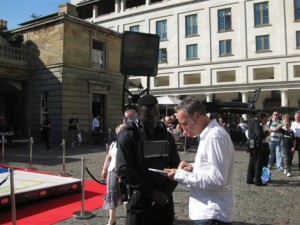 Going kommando is a priceless experience

We’ve covered earlier versions of what they call ‘NomadiX human messaging systems‘ at the 2010 Global Expo in Shanghai for the British Council and the Government and elsewhere so there has obviously been some demand internationally for the wearable screen systems.

Anyway, back in October the NomadiX Screenwalkers were used to unveil MasterCard’s campaign ‘Priceless London offering their customers privileged access to London’s attractions, a scheme already in use in New York.

Screenwalkers (that’s the people wearing all this stuff) equipped with uniforms and scripts, were introduced to the display area – their screens played promotional footage as they mingled with consumers. The bright weather we are told gave the anti-glare screens a stern test and much to customers surprise they were still clearly visible, adding to the sense that they were witnessing something new and exclusive.

Brand ambassadors used internet enabled iPads to demonstrate the Pricelesslondon.co.uk website and its benefits to consumers, providing an interactive element.

Many people processed a new online membership on the spot, enabling greater data-capture and follow-up dialogue, fitting in perfectly with the strategy of MasterCard’s marketing head, Paul Trueman, to switch from ‘Priceless moments’ as seen in TV campaigns, to ‘Priceless experiences’.

This entry was posted on Monday, December 12th, 2011 at 10:25 @476 and is filed under DailyDOOH Update. You can follow any responses to this entry through the RSS 2.0 feed. You can leave a response, or trackback from your own site.