Primesight, the outdoor media owner has retained the tender for the Glasgow Subway account in a competitive pitch against JC Decaux and CBS Outdoor. 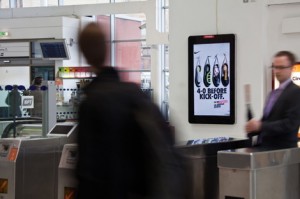 They hae trains 'at rin undergroond

As the incumbent Primesight has held the contract for over 20 years and it will now gain a further three year term with potential of another additional two years.

With Glasgow Subway carrying around 15 million passenger journeys per year it is seen as the jewel in the crown for the outdoor industry in Scotland.

The contract is estimated to be worth in excess of GBP 8 million over the five year period.

This year Primesight successfully launched its digital offering Primevision on 6 sheets across its system and currently has 20 digital screens in the Glasgow Subway. Primesight tell us that they will now be adding even more digital to the subway.

Interesting to note as well that the Glasgow Subway is one of the few subway systems offering full free Wifi connectivity at both concourse and platform levels which of course enables innovative opportunities for advertisers – Note tae CBS Outdoor, there’s nae need fur bluetooth up haur in Glasgee, Ed.

Keith Lammie, Primesight regional director told me “In the last 5 years we have delivered some fantastic and unique campaigns for our clients in the Glasgow Subway. From special builds and wrapped trains to live feeds and digital screens we continue to push innovative offers for our clients. We have put forward some ambitious development plans and it will be with pride to see these come to fruition over the next few months.”

Also interesting is that SPT, the regional transport partnership for west Scotland is currently upgrading its underground system at a sum of around £290 million over the next 20 years which will see driverless trains and smart ticketing installed.

Additional reporting by Adrian J Cotterill – err well okay then the Glasgee bits were mine!!

This entry was posted on Friday, December 16th, 2011 at 09:26 @435 and is filed under DailyDOOH Update. You can follow any responses to this entry through the RSS 2.0 feed. You can leave a response, or trackback from your own site.