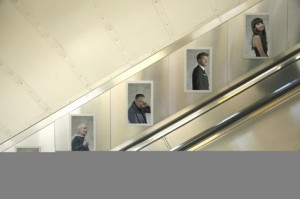 Using the flexibility of CBS Outdoor UK’s Digital Escalator panels, LCD panels and Cross-track Projection screens the campaign will target New Year’s revellers with three different forms of content in the lead up to midnight, at midnight and after the New Year countdown.

The 40 second ‘Party Carriage’ digital films will be live from 6am on New Year’s Eve through to the early morning on January 1st 2012.

Jason Cotterrell, Country Director at CBS Outdoor UK told us “Channel 4’s domination of our entire central London digital estate demonstrates the creative flexibility, high impact, and audience reach our screens can offer. This will allow the broadcaster to engage with huge volumes of revellers travelling on the London Underground on New Year’s Eve, as part of a unique campaign that has never been done before.”

Planned and booked by OMD and Posterscope, the campaign builds on the success of a recent Channel 4 news campaign with CBS Outdoor UK, where Cross-track Projection screens were used to bring live news updates to commuters.

This entry was posted on Thursday, December 22nd, 2011 at 14:20 @639 and is filed under DailyDOOH Update. You can follow any responses to this entry through the RSS 2.0 feed. You can leave a response, or trackback from your own site.