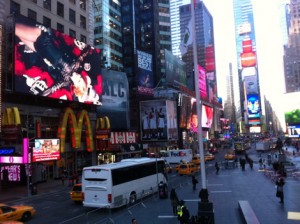 At 09:00 am EST on Friday, Madonna launched her new single and video ‘Give Me All Your Luvin‘ using Clear Channel’s global network of outdoor and broadcast assets.

In addition to New York, Vegas, Paris, Oslo and Helsinki, more than 1,600 Clear Channel Outdoor digital billboards around the world — including those in Singapore, Spain, Belgium and Sweden will shortly end up featuring Madonna (in subways, malls, railway stations and bars),

Clear Channel are quick to point out that in total, more than 100 million people will be exposed to the lady in question’s new single and video through Clear Channel Outdoor’s spectacular billboards.

What with her half time Superbowl appearance on Sunday Madge is sure going to get some exposure in the next few days.

This entry was posted on Friday, February 3rd, 2012 at 15:03 @668 and is filed under DailyDOOH Update. You can follow any responses to this entry through the RSS 2.0 feed. You can leave a response, or trackback from your own site.