So, what a week it has been. It started off for us (at least dry) on Sunday absolutely freezing cold (then as we emerged from a bar at 01:00am Monday morning it started to snow) and gradually got even colder! When the event finished late on Thursday afternoon it was still -3 outside the RAI! 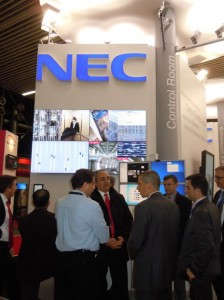 It was, surprisingly, the Belgians (and not the French) that caused the first travel disruption of the week – a strike of some sort mean that the Thalys high speed train could not come from Paris through to Amsterdam, meaning some disruption to Monday’s #AOpenForum and various day zero stand building.

The largest snowstorm in 27 years hit Northern Italy and I don’t think any of our friends or acquaintances from the region made it to the show.

Mind you, none of this affected the show numbers. A mind boggling 40,000+ people descended onto the RAI for the 9th ever show (yep, it all started nine years ago in Geneva).

Who knows what the organisers will have to do for the tenth show in 2013 in order to top this one?

So what were our impressions?

Let’s just finish up by saying that the bar has been set very high, both by ISE itself and by many of the corporate exhibitors. The corporates are starting to understand digital signage, digital signage and retail, the ad based market and corporate communications.

It’s going to be difficult for many of those vendors in our #DSTop10 to differentiate themselves (BroadSign of course has DOOH Ad Networks, ComQi has mobile / social in the retail space etc) but in 2012 it will be interesting to see just how they go about marketing themselves.

With the big corporates really starting to get to grips with this space it’s going to be an interesting year to say the least.

This entry was posted on Friday, February 3rd, 2012 at 14:41 @653 and is filed under Scuttlebut. You can follow any responses to this entry through the RSS 2.0 feed. You can leave a response, or trackback from your own site.