With their leader Denise MacDonnell on maternity leave, a perceived general lack of interest in the sector (witness the stand and people at #ISE2012 and at #dse2012) what should we make of the rumours flying around #dse2012 last week with regard Harris Broadcast? 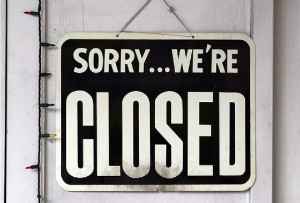 If the lawsuit we flew home with (a direct result of our time in Lost Wages) is anything to go by (not from Harris or from Broadcast International by the way) we should simply ignore, as it seems that repeating rumours is not the done thing with certain corporations!

But to us, a rumour is a fact just waiting to be discovered and so it pains us to have to tell you that, if there is any truth in the rumours we heard at #dse2012, then Harris could well be shutting their Digital Out-Of-Home division very shortly.

We’ve written before that cutbacks in military and defence spending has meant that Harris have had to be and are being more careful with their expenditure and it’s hard to see how top level management can see their foray into digital signage or digital out of home a ‘success’.

The money (foolishly we think) ploughed into DDN’s 7-Eleven network is simply money down the drain and they have not picked up any other big networks to speak of.

The talk at #dse2012 of the division’s demise was however more fuelled by talk of all the CVs (resumes to some of our readers) on the streets. To be fair, the consultants who joined Harris with much fanfare (and those consultants who didn’t join but just ‘consulted’) were not the only ones who seemed to be using #dse2012 to look for a new job but as one person told us “they were the most obvious”.

This entry was posted on Thursday, March 15th, 2012 at 09:44 @447 and is filed under Scuttlebut. You can follow any responses to this entry through the RSS 2.0 feed. You can leave a response, or trackback from your own site.

5 Responses to “Harris To Shut Its Signage / DOOH Division?”