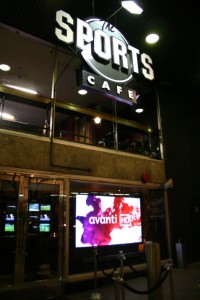 Here’s a street facing 103” Plasma screen at the Sports Café in London’s Haymarket district targeting the Haymarket’s passing footfall of approximately 40 million people a year (the Sports Café itself has something like 1.2 million annual visitors)

Jamie Ball, Sales Director at Avanti told us “The iconic screen is a fantastic addition to our network portfolio and fits perfectly with our strategy of sports driven media and emphasis on large
format digital screening that delivers a fantastic showcase for our advertisers”.

Separately Avanti told us that this is their first step in the roll out of a new HD offering which will shortly also encompass their shopping mall portfolio.

The trend as we have said for a while now is for bigger and bigger screens which is why in many instances ‘projection’ is the way forward (wouldn’t have worked in this instance cos’ of the layout of the bar) and for those who have seen it, we are told that the 103″ looks rather impressive – but hey! the trend is there for all to see that big screens in windows is the way to go!

Jamie also told us “With its central location in London’s West End, the screen will also be available to national advertisers as part of our recently launched Digital Life package (with Streetbroadcast) – the UK’s largest retail digital network”

Its core services include the design and management of screen network strategies, content creation and distribution, channel programming, infrastructure provision and advertising sales. Clients typically use Avanti’s services to drive sales, promote products, build brands, entertain customers and sell advertising at or close to the point of saleYour browser may not support display of this image.

This entry was posted on Thursday, December 18th, 2008 at 16:14 @718 and is filed under DailyDOOH Update. You can follow any responses to this entry through the RSS 2.0 feed. You can leave a response, or trackback from your own site.