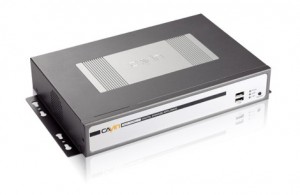 This new digital signage player is smaller and lighter than the old model (the size is reduced by one quarter and half the weight).

Perhaps the most interesting capability of the SMP-WEBDUO is its ability to control two screens simultaneously – users can select from the clone, distinct, or extended mode to display identical, different, or even stretched multimedia content from one screen to another. The player also supports 4 audio output jacks.

In addition to DVI and VGA outputs, the new player adds an HDMI connector and we are told that the SMP-WEBDUO can playback 1080p full HD video, music, HTML/Flash, image, ticker, clock, and live feed information, such as the weather and news.

This entry was posted on Tuesday, April 10th, 2012 at 16:18 @721 and is filed under DailyDOOH Update. You can follow any responses to this entry through the RSS 2.0 feed. You can leave a response, or trackback from your own site.