AsomaTV, an operator of several digital signage networks in Spain, has deployed BroadSign’s Software-as-a-Service at all existing networked locations and will be using the platform for future installations from now on – swapping out poor old C-Nario YCD and Cisco in the process we believe. 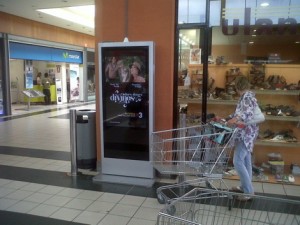 The migration from legacy software has involved 110 screens in 15 major shopping malls, most of which are located in Madrid. AsomaTV has also converted 30 of its 250 gym locations from static advertising to BroadSign-powered digital signage and is planning to complete the conversion in 2012, intending to expand the network to 500 gyms by 2014.

In addition to running their own networks, AsomaTV acts as an outsourced operator of several corporate digital signage networks across Spain. AsomaTV’s CTO Robain de Jong told us that BroadSign’s automation-focused functionality was a welcome relief after “five years of micromanaging playlists, manual troubleshooting and the lengthy, painful process of installing and configuring players at new locations.”

By contrast, BroadSign technology made it possible for AsomaTV to migrate their entire mall network to the new software remotely, in just one day, and allowed the company to drastically cut down the time spent on scheduling and monitoring campaigns.

“BroadSign gives you peace of mind,” said Robain de Jong. “You just know it works. And no matter what the requirements of your customers are, BroadSign allows you to meet them. We are no longer afraid of remote installations. We configure client players in our operations department, then we ship them to the client and we know that as soon as they plug them in, everything works.”

AsomaTV’s content loops in the shopping mall network are 90 seconds long, comprising 10-second advertising spots targeted for each location. The four-minute loop in the gym network is a mix of advertising, location-specific messaging and ‘infotainment’ feeds.

The network runs both national and local campaigns and advertising sales are handled by a third-party media rep as well as by the in-house sales force.

This entry was posted on Thursday, April 26th, 2012 at 12:45 @572 and is filed under DailyDOOH Update. You can follow any responses to this entry through the RSS 2.0 feed. You can leave a response, or trackback from your own site.