“Greetings from China! This is Vincent Woo, reporter from Asia OOH in Shanghai, China. I’m writing to inquire if you would be so kind as to share your insight into DOOH with Asia OOH readers?” asked the email a few months ago. 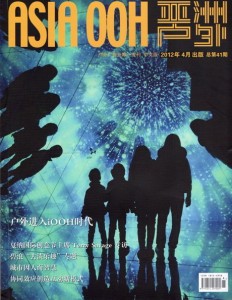 If you have never seen the magazine, it’s really, really good and written in parts in both English and Chinese – and as Vincent asked so nicely, we were only too pleased to help.

As the first professional magazine that focuses on the out-of-home advertising industry, ASIA OOH analyzes and supports the development of the industry with professional insight and international perspective. Through providing in-depth information on the field, it has become an influential reference in the thinking and action of government supervisors, OOH media suppliers, advertising agencies and advertisers. ASIA OOH is currently the one and only professional issue in the Asia-Pacific region that focuses on the OOH advertising field.

This entry was posted on Wednesday, May 9th, 2012 at 18:32 @814 and is filed under Scuttlebut. You can follow any responses to this entry through the RSS 2.0 feed. You can leave a response, or trackback from your own site.