#ScreenmediaExpo was almost over when this little guy popped into our view, and while he isn’t digital signage per se, we expect we’ll be seeing him around a lot of trade shows and events in the future. 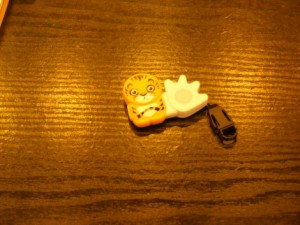 His name is Poken and he was born in Switzerland.

If you are having an event, you can load the business card information of each delegate into a Poken.

Then, as one delegate meets another, their individual Pokens high four each other – you can’t high five when you only have four fingers we were told, Ed, thereby exchanging business cards without the need of paper.

Further, speeches, brochures and other material can also be exchanged in the same way, eliminating the need for a lot of paper brochures and the like.

It also gives exhibitors an easy way of knowing how many of their brochures have actually been picked up.

Poken – who comes in a range of colours – also has an office in Palo Alto, California.

This entry was posted on Monday, May 21st, 2012 at 09:45 @448 and is filed under Scuttlebut. You can follow any responses to this entry through the RSS 2.0 feed. You can leave a response, or trackback from your own site.