We really were quite entranced with Vueinti’s new product – so new that it doesn’t really have a name yet. 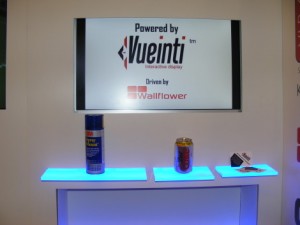 A variation on the company’s Chrystal Box, the new product seems perfect for, eg. a perfume company with several brands. A shelf holds the products and, as one is picked up, a sensor triggers the screen behind to describe that particular product or give whatever information a client wants.

I can see it used to acquaint me with other products offered by the same company as well as for introducing a new product. While it would have been nice to see it demonstrated with Givenchy’s Organza (my current favourite) along with a couple of other Givenchy brands, the product is so new that it was demonstrated with a spray, an empty soft drink can, and some cards. Quite funny!

However, it will be priced more in line for high end retail products. While I pictured it more for perfumes and expensive cosmetics, I expect that it could be used for high fashion shoes, leather goods and the like. 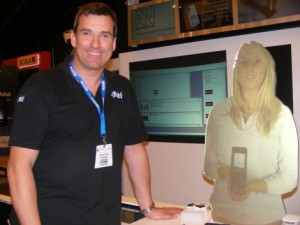 Vueinti, headed by Geof Jones, president and owner, offers a wide range products, Its virtual mannequin is very popular in the health care sector where it is often used to remind people to wash their hands or to use the health centre’s antibacterial product.

“We’re bringing out a children’s mannequin to do the same thing,” says Jones. It could be used not only at health centres but daycares, schools and other locations.

For most of its products, Vueinti designs and builds its hardware, using partners for its software and preferred suppliers for support and installation.

“We also partner rather than using resellers or dealers,” says Jones. “However, we have recently developed reseller relationships for both Canada and the U.S. markets.”

This entry was posted on Monday, May 21st, 2012 at 10:15 @468 and is filed under DailyDOOH Update. You can follow any responses to this entry through the RSS 2.0 feed. You can leave a response, or trackback from your own site.

One Response to “#ScreenmediaExpo @Vueinti For The High End Retailer?”