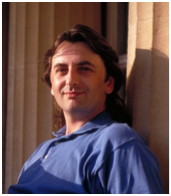 In a career spanning 30 years, Vogel is credited as having pioneered a number of 3D effects and techniques including: holography, laser projection, animated autostereograms , 3D shadowgrams and 3D holographic projection.

In 1982, Jon set up the UK’s first holographic design agency. Numerous prestigious 3D commissions were undertaken including the production of the world’s largest hologram for the Michelin tyre company, and the world’s first Disney embossed holograms. In the late eighties, working with his team of 20 specialists, Jon developed a number of unique laser projection techniques and advanced sound and light control systems. He designed and produced a number of national day son et lumiere events for the governments of Oman, Libya, and Qatar. He was responsible for the installation of the world’s first laser advertising system which went into the Odeon cinema Leicester Square.

In the 1990’s he was invited to set up Saatchi & Saatchi 3D, a joint venture with Saatchi & Saatchi advertising agency. He ran what was then the first ad agency in the world to have an in-house, fully comprehensive 3D offering. Made available to Saatchi’s London and international clients were 33 different 3D effects, systems and techniques. Several multimillion dollar 3D projects were completed for such clients as Procter & Gamble, Sony, and Hewlett Packard.

Over the last five years, Vogel has concentrated on the development and application of 3D holographic projection techniques and system installations. He personally developed a version of augmented reality which has been designed to works with the Pepper’s Ghost 3D projection process.

He has worked on all aspects of 3D, from design, origination and production, through to project management and installation. He has completed 3D projects all over the world (23 different countries) and worked for over 50 blue chip clients. He has also lectured on 3D imaging techniques and provided consultancy services to Hollywood film companies looking for futurist 3D ideas.

This entry was posted on Tuesday, May 22nd, 2012 at 14:00 @625 and is filed under Scuttlebut. You can follow any responses to this entry through the RSS 2.0 feed. You can leave a response, or trackback from your own site.