Astral Out-of-Home is deploying a Digital Column network in Montréal, making Montréal the first Canadian city to feature such an innovative network similar the those seen in other world-class cities such as London and San Francisco. 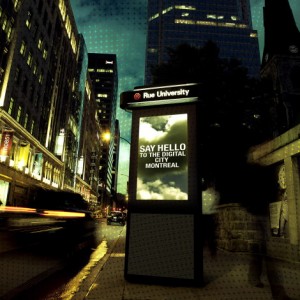 The new network will consist of 30 urban Digital Columns to be gradually installed as of mid-August in the heart of downtown Montréal.

Each column will be equipped with a 72” HD LCD screen and a geographical map of downtown on the opposite face. The columns will be installed in key locations throughout downtown’s major commercial streets, including Sherbrooke and Ste-Catherine, as well as near busy areas such as the Quartier des spectacles.

The Digital Column network will reach nearly 1 million consumers per day. The numerous technological features of the new Digital Column network will promote creativity and redefine ways of interacting with consumers. RSS feeds, QR Codes as well as the integration of NFC technology will enable advertisers to immediately deliver content and create the opportunity for real time exchange between advertisers and consumers. For example, a campaign can be adapted to the time of day or to coincide with a specific event.

“The roll out of this highly innovative network once again demonstrates the creative and avant-garde nature of Astral Out-of-Home’s team and offer,” says Luc Sabbatini, president, Astral Out-of-Home. “We are particularly proud that the first Digital Column network in Canada is launched in Montréal, enabling our advertisers to target a highly active and mobile population segment where they work, shop and play.”

In addition to being more aesthetic, innovative, and technologically-advanced, each new Digital Column will enable six advertisers to display their ads 24 hours a day in rotation, managed by Astral Out-of-Home’s control centre. The introduction of this new network also stems from the company’s desire to further reduce its environmental footprint by eliminating printing and installation costs.

Astral Out-of-Home is one of Canada’s largest out-of-home advertising companies, with a network of more than 9,500 advertising faces strategically located in the key markets of Québec, Ontario and British Columbia. It offers a portfolio of four innovative product lines: outdoor advertising, street furniture, transportation and digital. The company already offers digital billboards in Montreal, Toronto and Vancouver regions and the company had one digital board outside the Montreal Museum of Fine Arts. However, most of the company’s posters, columns and other products to date have been static backlits and other traditional media.

Astral Out-of-Home is part of Montreal-based Astral that was recently purchased by Bell Canada Enterprises.

This entry was posted on Tuesday, June 19th, 2012 at 19:30 @854 and is filed under DailyDOOH Update. You can follow any responses to this entry through the RSS 2.0 feed. You can leave a response, or trackback from your own site.

One Response to “Montréal Becomes A Digital City”