T-Rex Property Ab based out of Stocksund in Sweden of all places has filed suit against CBS Corporation, Clear Channel Outdoor Holdings Inc. and Lamar Advertising Co. in the U.S. District Court for the Eastern District of Texas. 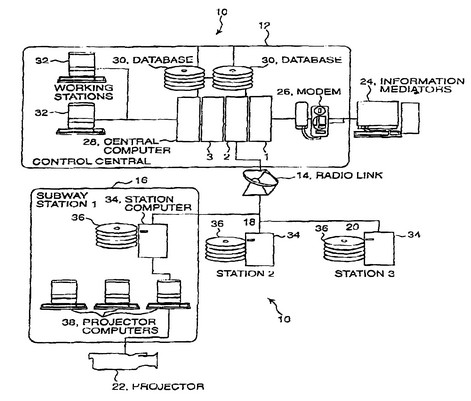 The defendants are accused of infringing on U.S. Patent No. RE39470 issued Jan. 16, 2007, for Digital Information System1. This was filed in March 2001 and as design patents, we believe, have a life of 14 years from filing you do the math!

T-Rex Property Ab is asking the Court to issue an injunction to prevent further infringement and for an award of damages, interest, attorney’s fees, and court costs.

1Abstract: The invention relates to a digital information system (10) for displaying information on at least one display means with the aid of at least one projector (22). The exposures are presented at places accessible to and frequented by a general public. The information system (10) includes external information mediators (24) and information is controlled dynamically through the medium of a communication interface (26) and through the medium of an exposure handler in a central computer (28). The inventive system also include a communication interface (14) against an elective number of station computers (34) having connected projector computers (38) which control projectors (22) for displaying pictures or exposures. The station computers (34) and peripheral equipment are situated at mutually distanced places. According to one particular field of use, the places mentioned are subway stations (16, 18, 20) and projectors (22) project exposures or pictures onto display means positioned at selected places in the stations (16, 18, 20).

This entry was posted on Tuesday, June 19th, 2012 at 17:51 @785 and is filed under DailyDOOH Update. You can follow any responses to this entry through the RSS 2.0 feed. You can leave a response, or trackback from your own site.

One Response to “T-Rex Property Ab (The New Minkus Minkus)”