As we continue our Software Holocron and unearth more history about the early days of the industry we have been finding (and of course have been sent) some interesting early photos – forgive us for continuing to say but they all make an absolute mockery of all the Minkus Minkus patent trolls out there. 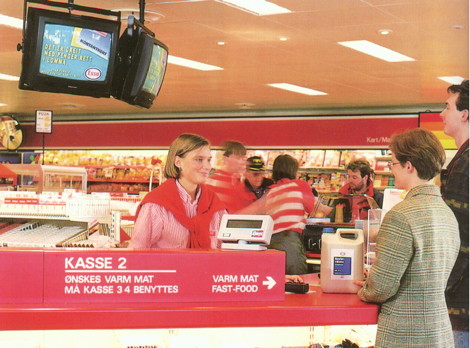 Shown above, courtesy of Scala / SignChannel’s Jeff Porter is a picture from the late 1980’s taken in an Esso petrol (for American readers this is an Exxon Gas) station in Norway of a TV set hanging above the cash wrap promoting things on sale at that forecourt / convenience store.

Jeff reminds us that at the time (definitely pre-World Wide Web) 1200 baud modems were about as fast as you could get then.

He explained by email “when your Scala ‘Master’ would call the ‘Player’, it would literally dial the phone number of the player directly, and hope the modem answered”.

New content was then downloaded in the background while the ‘Player’ continued to play the existing content on the TV screen.

Jeff tells us that he first got hooked on the concept of Digital Signage when he was head of R&D for Commodore. He tells us “I met a funny Norwegian guy named Jon Bøhmer. He had this killer program called Scala for the Amiga that he had developed in Norway, It was amazingly simple to use and produced the slickest looking multimedia”

That product was called InfoChannel and we believe that it was the first software for digital signage, mind you, the actual term ‘digital signage’ – a term usually attributed to John Kirkpatrick wouldn’t actually be coined until some years later!

Whatever you think of the current day Scala, there is no doubting that at the time they were once thirty years ahead of their time!

This entry was posted on Monday, July 2nd, 2012 at 12:16 @553 and is filed under Scuttlebut. You can follow any responses to this entry through the RSS 2.0 feed. You can leave a response, or trackback from your own site.