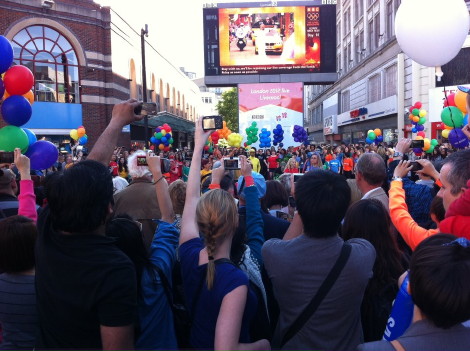 Originally conceived as part of the bid to win the 2012 Summer Olympics, the BBC Big Screens are a series of large scale outdoor screens appearing in public areas in 22 towns and cities across the UK including London, Liverpool, Manchester, Edinburgh and Belfast.

In a unique collaboration between the BBC, the London 2012 Organising Committee and UK local authorities, the BBC Big Screens have become live event sites with news and live coverage related to the Olympic and Paralympic games on display. Currently, the BBC Big Screens are being used to display live images of the progress of the Olympic torch runners, with an on-site BBC media truck sending the images over the mobile phone network back to the television centre in London.

From there, the pictures are streamed live to the BBC website and are also sent to the Big Screens operations centre in Birmingham. The BBC operates the Big Screen master control from Birmingham, while operations in each town allow local input.

The live content is then fed into the Audience system responsible for the scheduling and management of content, audio level control and data automation while also providing viewers remote access to the screens over the Internet. Supporting information regarding the current position of the Olympic Torch as well as the upcoming schedule and route is then added.

The Audience output is then streamed over a private network to all 22 screen sites where it appears several times an hour. When the Olympic Torch relay is in close proximity to one of the BBC Big Screens the Audience feed is displayed on that individual screen all day.

The screens, mostly 100” diagonal LEDs, have become a popular and powerful tool for urban regeneration and promoting community involvement by providing public coverage of a wide variety of special events including live coverage of Euro 2012, the Wimbledon Championships and the Royal Jubilee.

This entry was posted on Friday, July 6th, 2012 at 08:02 @376 and is filed under DailyDOOH Update. You can follow any responses to this entry through the RSS 2.0 feed. You can leave a response, or trackback from your own site.