VeriFone has been selected as the exclusive vendor for installation and support of the Taxicab Smart Meter System project in Washington, D.C.. 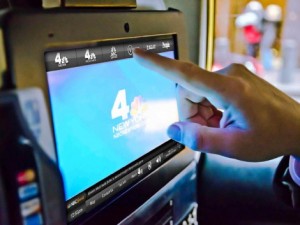 The contract, valued at from $35 million to as much as $45 million with advertising revenue, will result in all 6,500 District cabs being equipped with integrated VeriFone systems, including driver tablet, credit card acceptance device and passenger information tablet display, with display of news and other programming, as well as safety alert activation features for both passengers and drivers. The contract also includes a Back Office Management Information System that will provide the DCTC with automated trip reporting and GPS location services.

The contract was approved Tuesday by Washington’s City Council. VeriFone won the contract in a competitive bidding process.

“This presents a rare opportunity to significantly enhance the driving experience of District citizens and visitors while improving operations for drivers,” said Washington Mayor Vincent C. Gray in announcing the contract win. “The Taxicab Smart Meter System provides the riding public with new payment options and the opportunity to view digital content during trips. In addition, it improves manageability and accountability of the entire taxi fleet.”

Referring to the extension of VeriFone’s VNET TaxiTV platform to the DC taxi market, Chris Polos, VeriFone’s vice-president of media, says, “This will give advertisers unprecedented access and scale to an affluent and influential audience in a captive environment.”

“The District’s state of the art system represents the expertise VeriFone has developed in providing integrated secure payment and digital content solutions, which we call PAYMEDIA, for taxis and other market segments,” says Amos Tamam, VeriFone senior vice-president, Taxi Systems. “We’re extremely proud to add Washington, D.C., to the growing list of major cities utilizing our solutions and services.”

The addition of 6,500 cabs in Washington, D.C., will increase VeriFone’s taxi media footprint by 23% to over 35,000 in the USA alone, delivering over 10 billion advertising impressions annually. VNET’s TaxiTV now spans more than 11 major media markets across the Atlantic.

This entry was posted on Thursday, July 12th, 2012 at 04:01 @209 and is filed under DailyDOOH Update. You can follow any responses to this entry through the RSS 2.0 feed. You can leave a response, or trackback from your own site.