Adfonic enables advertisers to bid for display advertising space on mobile sites and applications to extend their reach and drive results, and publishers to maximize the earning potential of their mobile traffic.

The company competes closely with AdMob,Millenial Media, and InMobi, is building out a strong global presence and expanding heavily in the U.S..

Adfonic runs an average of over 4,000 campaigns a month for clients, including: Samsung, Warner Bros., eBay, McDonalds, Groupon and Google, and reaches an estimated 200 million mobile unique users monthly. Almost 80 billion ad requests were generated through Adfonic’s marketplace during Q2 2012.

Among points in its new AdMetrics report are that:

Globally, Adfonic’s total ad requests increased 15% quarter on quarter, with 8,256 active campaigns in Q2. Europe experienced the strongest growth, currently standing at 23 billion ad requests, a change of 34% quarter on quarter that enabled it to surpass North America for the first time.

The report shows that Apple’s iPhone remained the most popular device, while the large Android market was segmented across a large number of brands and models. (Samsung leads with four of the top 10 devices.)

The report noted that the Entertainment, Media and Technology audiences combined account for two-thirds of advertiser spend. 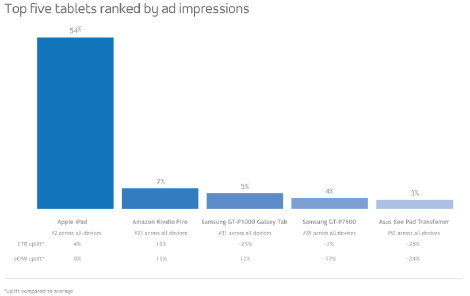 The iPad captured 55% of all tablet impressions, while the Android market was still very segmented. Within Android, the Kindle Fire continue to gain share and showed above-average CTR and eCPM performance.

The Kindle Fire was second to the iPad in volume of impressions but was far above in terms of CTR and eCPM. The iPhone lost 8% market share in Q2, but still generated 15% above-average CTR performance.

Europe: The Android platform took 8% market share away from iOS, which, however, still commanded a significant eCPM premium of 53% over Android. RIM still maintained a significant share in Europe (18%), where Blackberry Messenger was popular with younger demographics. Of the top ten European devices, Apple devices achieved the highest CTR and eCPM.

Among verticals, Entertainment & Media achieved an impressive conversion uplift of 707% above average, followed by Business & Finance (+117%).

Asia: Nokia and Symbian held about one-fifth of the market and achieved high eCPMs, +43% higher than the Asia average.

In terms of verticals, Entertainment and Media drove 50% of spend, achieving an impressive +42% conversion rate uplift. Technology & Telecoms followed with CTRs 52% above average.

South America: RIM, an attractive platform for younger audiences, took about 9% market share from iOS and Android. Although Apple still dominated the manufacturer league, with 34% of ad impressions, Samsung achieved the highest CTR (+44% above average) and eCPM (+41%).

Entertainment and Media made up 50% of the advertising spend and achieved some of the highest CTRs (45% higher than the average), followed by Travel (+24%). The Social & Dating vertical commanded higher CPC prices (+33%).

Africa: The Java and Symbian platforms increased their dominance, with a combined 63% of the market, against 50% in Q1. Nokia, the most recognized brand in Africa, accounted for 57% of all ad impressions in Q2.

Despite Nokia’s overall market share, Apple and RIM took the top two positions in an extremely fragmented market, with RIM more than doubling the average eCPM.

69% of the advertising spend in Q2 came from the Technology and Telecoms vertical.

Top Verticals by Days of the Week

The detailed report also gets into Pricing and performance per region; Gender targeting; Time targeting, and Days of the Week targeting. Among the many interesting parts we noticed (globally):

This entry was posted on Monday, July 23rd, 2012 at 10:00 @458 and is filed under DailyDOOH Update. You can follow any responses to this entry through the RSS 2.0 feed. You can leave a response, or trackback from your own site.