The 19,600-seat AmericanAirlines Arena, South Florida’s number one entertainment destination (and home of the Miami HEAT NBA team) has ANNOUNCED plans to be the first sports arena in the world to install A2aMEDIA’s Mediamesh technology.

Mediamesh is a high-grade, flexible architectural woven stainless steel mesh that can secure to any structure – here A2aMEDIA has used it to create a transparent digital LED display surface for showcasing digital images on large-scale buildings. 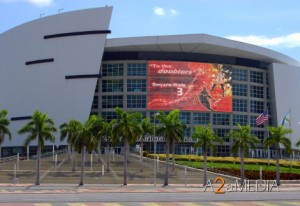 Because Mediamesh is 70% transparent, the screen doesn’t obstruct views from inside the building and when there is no image displayed on the screen it blends (pretty much) with the buildings own architecture – it also uses one-sixth the electricity of conventional LED screens we are told.

At the AmericanAirlines Arena the Mediamesh facade will cover 12 of the concrete/glass bays that comprise a significant portion of the Arena’s supergrid (front wall of windows), something like 3,400 square feet.

Mediamesh “curtains” are made of linear tubes filled with LED nodes that provide the “pixels” for a large-format display mesh. At only three quarters of an inch thick, the mesh panel is incredibly durable, and has the ability to withstand extreme heat and cold.

Installation is scheduled to begin in spring 2009 and is expected to be completed within two months.

Andrew Melton, president of A2aMEDIA told us “The AmericanAirlines Arena is an ideal place to display the innovative features of our Mediamesh technology, which has unlimited size potential and can be tailored to fit virtually any structure. A2aMEDIA’s unique installations allow for a combination of visual transparency, breathability and powerful motion graphics, providing advertisers and sponsors with a visually exciting medium for sharing their messages in a dynamic and engaging way.”

A2aMEDIA is the first to bring Mediamesh technology to the U.S. and Canada through an exclusive agreement to purchase and sell the technology while developing a national network of transparent media facades.

Boston-based A2aMEDIA, Inc. is a next-generation media company that designs, installs and operates large-scale outdoor LED displays as transparent building facades that use just one-sixth the electricity of conventional LED boards, require no external cooling and provide passive solar gain. A2aMEDIA has applied Mediamesh® technology — a high-grade architectural material made of woven stainless steel mesh — to digital LED displays, creating a unique surface for exhibiting digital images. When the display is off, it blends seamlessly with the building architecture. When it’s on, images float across the surface in high-pixel resolution; because it’s transparent, views from inside the building are unobstructed by the screen. A2aMEDIA installations harmonize building form and function, giving owners the ability to monetize real estate through an advertising-supported, visually engaging, digital media display that doubles as a platform for communicating marketing and branding messages.

This entry was posted on Monday, January 12th, 2009 at 14:17 @636 and is filed under Scuttlebut. You can follow any responses to this entry through the RSS 2.0 feed. You can leave a response, or trackback from your own site.

One Response to “Transparent Digital LED Planned For North America”