Baton Rouge commuters traveling east on I-10 one morning last week got a glimpse of Dr. Disco dancing on Lamar’s billboard catwalk. 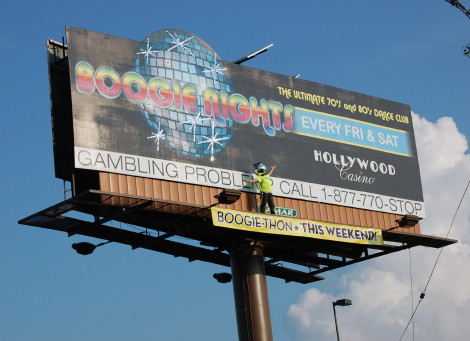 “This wasn’t just a random guy with boogie fever,” Allie Leung, manager of marketing communications at Lamar told us. “It was a planned promotional event to kick off a 26-hour Boogie-Thon happening on the weekend at Hollywood Casino to raise money for several local charities.”

Hollywood Casino is a client of Lamar Advertising Company at its Baton Rouge office.

This entry was posted on Monday, August 13th, 2012 at 16:00 @708 and is filed under Scuttlebut. You can follow any responses to this entry through the RSS 2.0 feed. You can leave a response, or trackback from your own site.