Sir Alan Sugar’s digital signage company, Amscreen announced another client win this week, this time a deal with the Grauniad. 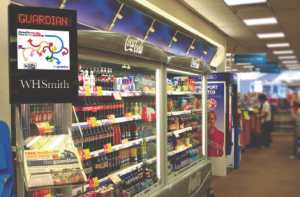 It’s basically a well engineered partnership with Guardian News & Media, publishers of The Gaurdain and The Observer newspapers, following a successful trial with the company in WHSmith stores.

Sir Alan Sugar told us (fresh from his ‘albeit’ recorded BBC Money Programme broadcast in the UK on Sunday night) “We believe digital signage technology has great potential to create additional revenue streams for a range of brands and retailers. We’re delighted to announce this deal with The Guardian and look forward to extending the relationship with them beyond the initial period.”

The deal will see Amscreen’s close proximately signage screens rolled out across 25 independent outlets, across a number of university cities. A further UK-wide expansion is planned for 2009.

Anyway, these horrible looking screens, typically positioned above newspaper stands, will carry advertisements and information for customers on both The Guardian and Observer newspapers, including support for giveaways, supplements and special editions.

We are told that in a recent trial of the Amscreen products in WHSmith stores, the screen advertising recorded a 5.22% increase on sales of The Guardian in the trial stores, compared with a 0.3% increase average in the other WHSmith outlets.

Kai Muxlow of the Guadrian told us “We are pleased to be working with Amscreen on this project. We are always looking for different ways to communicate with our customers and the recent Amscreen trial in WHSmith stores proves that the technology can help increase sales.”

Nice UK rollout, shame about the screens. Next stop, perhaps, Amscreen to announce that they have won the BPTV contract?

This entry was posted on Wednesday, January 14th, 2009 at 10:20 @472 and is filed under Scuttlebut. You can follow any responses to this entry through the RSS 2.0 feed. You can leave a response, or trackback from your own site.