Titan is adding more digital inventory to the Canadian market place with an expansion in Vancouver, the largest city in Western Canada. 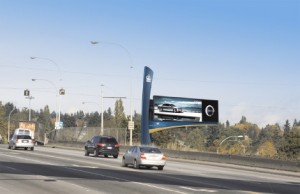 This is interesting, because we’ve had our eye on the Vancouver market since prior to the 2010 International Olympic Winter Games when we watched Astral trying to get a digital foothold in the market. Astral finally was able to get its spectacular digital boards up only by putting them on native-owned lands in the Vancouver region.

As it turns out, Titan won this assignment after an RFP by the City of New Westminster, a member municipality of the Greater Vancouver Regional District.

In November, Titan will be adding a total of eight digital display faces. Three locations will be available as 14’h x 48’w superstructure displays and one will measure 10’h x 35’w. The displays will run a one-minute loop of content with six advertisers in 10-second increments.

“Some of Canada’s most highly traveled highways run through Vancouver, a city with more than 2.3 million residents,” says Jörg Cieslok, Titan’s executive vice-president and general manager for Canada. “Our digital screens are so effective because they stand out on these thoroughfares with little to no other advertising competing for attention.”

The digital displays will be seen at the following locations:

The stands are currently being built and will resemble those in the artist’s rendering. If you noticed the crown on the stands, it is the symbol of New Westminster, known as the Royal City since being named after Westminster in the U.K., by Queen Victoria. Respondents to the RFP were asked to incorporate the heritage of the city into their proposals.

This entry was posted on Tuesday, October 2nd, 2012 at 10:00 @458 and is filed under DailyDOOH Update. You can follow any responses to this entry through the RSS 2.0 feed. You can leave a response, or trackback from your own site.