Since Tom Nix took over as Scala CEO almost 18 months ago, he has done a great job, getting rid of the old, bringing in some really good new hires and promoting the brightest that he had available but one thing that he has seemed unable to do is keep all of his channel partners (and some of his largest customers) particularly happy. 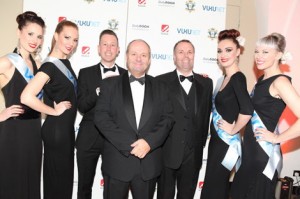 Phil Austin (front and centre) at The DailyDOOH Gala Awards

We have all seen some of the Scala Channel start to defect (witness JBTec switching to Signagelive in Brazil) and personally, we have to say that at one time or another, all of Scala’s disgruntled family has come and had words with us.

News just in then, that will surprise few is that their largest UK customer has now officially jumped ship to Signagelive. This we believe includes a massive single order for 5,000 licenses.

Phil Austin, who has been incredibly passionate about Scala for as long as we can remember, told us exclusively “Over the last fourteen years, companies I have owned and been involved in have had some great times working with Scala. As with all good things however there comes a time to move on. Over the last year The Life Channel Group have investigated most major Digital Signage solutions and have been massively impressed with a number of solutions with SignageLive and Broadsign being clearly the leaders in terms of fulfilling our own unique needs”.

Phil continued “The Life Channel Group however had rather unique requirements not least the soon to be announced integration of ActivPlay and a global on line media booking system. In this regard our engineers concluded that SignageLive represented the best way forward for our group. There were of course many other reasons why we chose Signagelive and look forward to working with them over the coming years as our Education network continues to grow”.

Not only has Phil brought Scala good business with his own network; The Life Channel (in the UK and in South Africa) he has also been extremely influential with Tesco, Jewsons, Grahams, ASDA (UK) and many others.

Signagelive CEO Jason Cremins told us “We are thrilled to secure The Life Channel as a customer. This surely represents a growing shift from traditional client/server self-hosted legacy digital signage solutions to a managed service offering. Providing Digtial Signage as a service removes the need for customers to purchase, install and maintain expensive and complex technology, allow them to focus on their core business activities”.

Scala will miss Phil and the business he has brought them. This is a big win for Signagelive.

This entry was posted on Wednesday, January 16th, 2013 at 15:51 @702 and is filed under Scuttlebut. You can follow any responses to this entry through the RSS 2.0 feed. You can leave a response, or trackback from your own site.

One Response to “The Life Channel Ditch @ScalaInc, Choose @Signagelive”