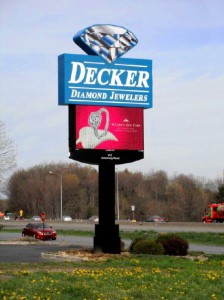 Decker Diamond, a premier jewelry store and source for, has served the Johnstown and Altoona area for more than three decades. Within months of having a color16mm LED sign from Watchfire Signs installed, store owner Dan Decker, estimates that the sign had attracted an additional 700 to 800 new customers.

Decker says, “When we ask new customers what brought them in, the responses are interesting. From, ‘I don’t know, but where is the piece that is on the sign,’ to ‘I pass the store often, but something drew me in.’” Clearly, he says, advertising on the Watchfire LED sign is making an impact.

“Competitors in our area often promise customers their signs are ‘the same as Watchfire,’ but once we can sit down with them and compare the factory warranty, customer support six days a week, service warranty agreement, country of origin (U.S.), quality and features – such as automatic dimming, time and temperature, and RF wireless communications – it’s clear to them why Watchfire is the best in the industry,” says Lovett.

Decker Diamond Jewelers has used the Watchfire sign in some unexpected but effective ways. During the holidays, it posted advertisements such as ‘Your wife Becky’s present has arrived. Come pick it up’. This approach prompted area husbands to shop on impulse for their wives, a key way to stimulate sales growth.

The LED sign has had unexpected benefits as well. After an unfortunate theft at the store last November, Decker used his Watchfire and posts on Facebook to publicize security footage. The publicity was instrumental in helping police identify and arrest the suspects.

“People were calling, driving by and even stopping to photograph the sign,” says Decker. Within a day, the suspects in the surveillance images had been identified.

Decker Diamond Jewelers’ Watchfire LED sign has been so effective in part because of its superior image quality and reliability, read this in-depth guide. Decker says that Watchfire’s industry-best five-year warranty, personalized customer support and Ignite Graphics Software were important factors, and, “The return on investment is far quicker than I expected.”

Decker described using Watchfire as “one of our best business decisions.”

This entry was posted on Tuesday, February 19th, 2013 at 11:00 @500 and is filed under Scuttlebut. You can follow any responses to this entry through the RSS 2.0 feed. You can leave a response, or trackback from your own site.