Whilst many UK delegates to ISE, Amsterdam were left stranded by severe weather conditions, 460 guests out of the expected 650 made it through to The InAVation Awards on Monday 2nd February 2009 in the Ballrooms of the Hotel Okura, Amsterdam. 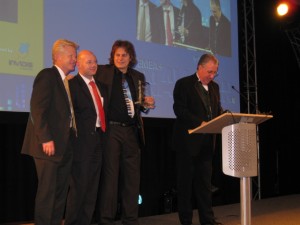 Not surprising really that at an A/V event 18 out of the 19 award categories were related to installations, loudspeakers and screens, or as one wag at my table put it, the award for the ‘sexiest cable’

There was however one Digital Signage category, and as Adrian predicted correctly (again) was won by Screen NT for their installation at the Audi Forum in Ingolstadt, Germany.

It would have been nice to have seen a short video presentation of at least the winners, but that would have prolonged the proceedings by another 40 minutes; so it was probably an understandable omission – there were a lot of thirsty delegates at the tables for whom the awards were what was keeping them from the bar!

The event was sponsored by Christie, Hitachi, Mitsubishi and ISE. Full details of the awards are posted on the dedicated website ‘Inavation Awards 2009’

This entry was posted on Thursday, February 5th, 2009 at 18:54 @829 and is filed under Events. You can follow any responses to this entry through the RSS 2.0 feed. You can leave a response, or trackback from your own site.