Looks like BlackBerry is using the Amscreen network as part of their BlackBerry 10 marketing campaign and specifically to support their experiential activity – we note also that Amscreen are integrating live Twitter feeds into adverts in real time. 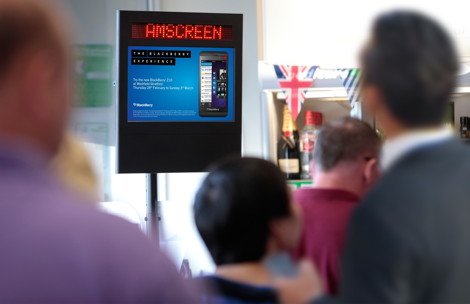 We understand that it is a seven week nationwide campaign and as part of the BlackBerry Z10 smartphone’s initial launch activity, BlackBerry has utilised Amscreen’s national screen network to run time-specific ads at over 1,900 forecourt and convenience store locations.

The campaign now launches into a second stage of ads which combines automated location content (GEO+) as well as live social content via Twitter. The ads highlight BlackBerry’s experiential roadshows that are taking place at over a dozen shopping centres across the country. The campaign uses Amscreen’s GEO+ technology (ads that automate content based on location) whilst also combining live Twitter content, giving further detail on the roadshow and sharing consumers’ thoughts on BlackBerry 10 in real-time.

This entry was posted on Tuesday, March 19th, 2013 at 10:09 @464 and is filed under DailyDOOH Update. You can follow any responses to this entry through the RSS 2.0 feed. You can leave a response, or trackback from your own site.