#2013SignExpo What Visitors Looked For In The Digital Zone

We noticed that many of the visitors to the #2013SignExpo’s Digital Zone last week stemmed from South America, Central America and Asia. 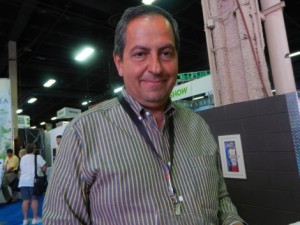 We spoke to a few of the many visitors to see why they made their way to the sector identified by the green rug.

Ricardo Escoto of Rentable, a billboard company is Mexico, told us he wanted to see LED options for outdoor use. He told us that his company has 1,500 billboard faces and another 1,000 planned.

“We currently have 28 digital screens as well as 50 revolving screens with three faces,” Escoto said. 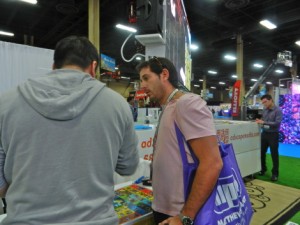 Ambres was interested in asking questions of the various exhibitors so we didn’t get to know much about his company, but it seems to have extensive business interests in several fields that we noticed includes digital graphic design, catalogues, brand activation and many others.

Peter Hellermann, CEO of smartPIX in the Bronx, New York, wanted to get an idea of trends in digital signage and especially in billboards. 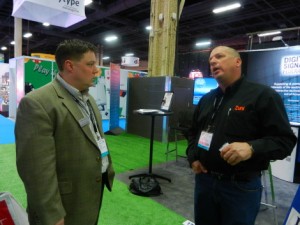 William Stavolo of Florida-based Zuni Scrolling Signs was looking for scrolling signs, backlits and LED and generally wanted to learn more about the digital signage sector.

Also spotted on Day One was Phil Cohen, current DSF chair and president and CEO of CARE Media Holdings.

This entry was posted on Wednesday, April 10th, 2013 at 07:01 @334 and is filed under DailyDOOH Update. You can follow any responses to this entry through the RSS 2.0 feed. You can leave a response, or trackback from your own site.