With purchase behavior influenced by many factors before the consumer ever gets to the cash register, consumer goods brands are using mobile advertising to target consumers and drive brand awareness to keep their products top of mind.

Targeting audiences based on location and proximity to a store that sells a brand’s products can get new consumers in the door and one step closer to the product. 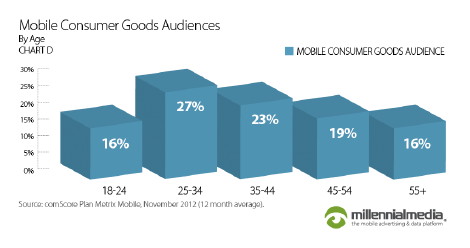 Millennial Media’s new CPG Mobile Intel Report brings readers up-to-date on how mobile consumer behavior has continued to evolve with the proliferation of smart phones, tablets, and other connected devices around the world.

As a result, advertisers have seen the benefits and subsequently increased their mobile spending. Mobile internet advertising spending worldwide – across all digital formats including display, search and others – reached $8.4 billion in 2012, according to eMarketer, and will rise to $13.58 billion in 2013 and eventually top $36.87 billion in 2016.

The mobile consumer goods audience is made up of consumers who frequently engage with Consumer Goods content and ads on their mobile devices. Consumers are using mobile to: 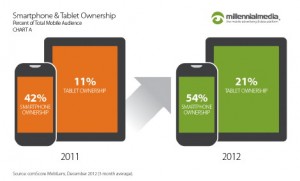 Consumer Goods products, such as food, beverages, and household products and supplies, are most often purchased in-store, often from grocery stores. Therefore, a mobile consumer’s grocery behavior, online or offline, can influence their purchase of consumer goods products. While the majority of grocery products are purchased in-store, some grocery items are purchased on a mobile device, providing another opportunity to influence a consumer’s product selection.

Of the total mobile audience, men are responsible for 54% of mobile grocery shopping, and are the majority of shoppers in the 18-24 and 55-64 age demographic

Research suggests that most consumer pre-purchase behavior is done on a tablet device, presumably in the home, as over 90% of tablet impressions on our platform are from a Wi-Fi connection. Then, once the consumer leaves the home, the devices and activities performed change. When in-store, the majority of consumers are using their smartphones.

However, this in-store behavior differs by gender. Both men and women look for product information, but they go about it in different ways. Men are more likely to compare prices and check product availability, while women are more likely to engage in social activities, such as asking a friend or family member about a particular product.

Site Traffic (29%) and Sustained In-Market Presence (11%) were the second and third most common campaign goals for Consumer Goods brands.

The report notes that mobile savvy consumer goods advertisers leverage location-based targeting campaigns to ensure that their message gets to mobile users at the right place and time, such as within the radius of a grocery store, or towards the end of the work day, when one might run errands on the way home.

In 2012, 40% of consumer goods campaign spend on the Millennial Media platform was attributed to at least one of the many forms of real-time location-based targeting.

Audiences are dynamic and a mobile user shifts into different audiences throughout the day. The report recommends that dvertisers should target diverse or multiple audiences to make sure that they are reaching an optimal set of mobile users.

This entry was posted on Thursday, April 18th, 2013 at 10:00 @458 and is filed under DailyDOOH Update. You can follow any responses to this entry through the RSS 2.0 feed. You can leave a response, or trackback from your own site.